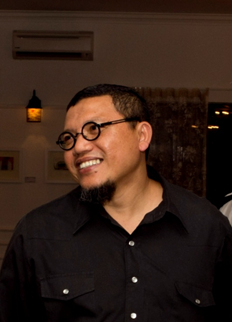 Noor Azizan Rahman Paiman is one of Malaysia’s top 10 contemporary artist. Azizan Paiman was born in 1970 in Melaka (Malaysia). He lives and works in Seri Manjung in Perak, Malaysia.

He travelled in Asia and Europe (UK, Australia, Japan, Indonesia…) and was invited in various international events:

Azizan Paiman has participated in numerous solo and group shows in Malaysia and abroad (Singapore, Japan, New York, Australia). His practice has been the object of a quantity of articles in the media since 1994.

His artwork plays with social mores, politics, gender issues and current events with a focus on Malaysian contemporary life. His artworks are inspired by the rapid, intense changes that Malaysia has gone through as a nation over the years. He calls himself ‘a back-dated reporter’. He transmits his thoughts, feelings, opinions on people and things around him, and put down his layman analysis on canvas.

“However his work is inspired, they have a way of putting thoughts in your mind. At the same time, although the disturbingly ridiculous quotes encrypt the message of the respective pieces pretty well, Paiman’s paintings can also be interpreted any way a viewer wishes to look at them.” – Esquire Malaysia, January 2014

The work of Azizan Paiman is part of important public collections:

His works are also part of the major private collection in Malaysia, while some are in South-East Asia, France and USA.